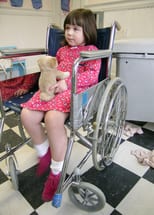 The symptoms of cerebral palsy may vary greatly for each individual. Symptoms may include difficulty with movement and muscle coordination, as well as neurological problems.

Symptoms may include problems with walking, muscles that are stiff, weak, or floppy, as well as:

Some individuals with cerebral palsy may also have difficulty with eating and swallowing because the muscles of the throat have been affected by the disease.

Other symptoms may be neurological, affecting the brain and related functions that may include:

Symptoms may be severe in some individuals and milder in others.

Cerebral palsy affects the central nervous system and may occur as a result of several different causes. In most cases, the condition develops during pregnancy, and is caused by abnormalities inside the developing brain during fetal growth. This may be caused by:

Cerebral palsy may also be caused by brain damage that occurs during the first few months of life. This damage may be caused by a lack of oxygen to the brain during a difficult labor and delivery, or as a result of a brain infection, premature birth, or a head injury.

If cerebral palsy is suspected, a review of symptoms and a physical examination is performed. Blood tests may be administered to rule out any other conditions and additional diagnostic tests may include:

Vision and hearing tests, as well as a complete neurological screening may also help to diagnose cerebral palsy.

Although there is no cure for cerebral palsy, there are several treatments available to help ease the symptoms of this condition and improve physical capabilities. Treatment for cerebral palsy may include medication to help control seizures, relax muscle spasms and relieve pain. In addition, individuals may benefit from the following therapies to increase mobility and muscle function:

Speech and language therapy may be beneficial to those patients whose speech is affected by the disorder. Speech therapists can also help with difficulties with muscles used in eating and swallowing. Assistive devices such as braces, splints or casts may be effective at increasing mobility. In severe cases, surgery may be required to correct structural abnormalities or release tight muscles.

Through continued treatment, most children are able to improve their motor skills and lead a life that is as close to normal as possible, and go on to enjoy functional, independent adult lives.